Simon Shaw red card vs the All Blacks in 2004 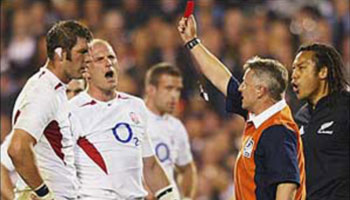 This occured between the All Blacks & England in 2004, and is more of a talking point than a spectacularly violent incident.

Simon Shaw gets red-carded in the 10th minute for kneeing All Black lock Keith Robinson during ruck-time. England, who had had a decent start to the test match, had to play with only 14 men for the rest of the match. They lost 36-12.

Clive Woodward, the English coach, was furious about the sending-off: “We had an incident in Wellington last year when Ali Williams (All Black lock) stomped all over Josh Lewsey’s head and was cited, but got off scot free in front of the judiciary.”

All Black’s Coach, Graham Henry, had no comment. The New Zealand Captain, Tana Umaga claimed that a 15 vs. 15 game would have been better, as the sending-off greatly altered the composure of the two sides.

Keith Robinson, the played who got kneed, said this:
“I was on the bottom of a ruck and I heard the crowd go off. I didn’t know what had happened. When I got up I saw the red card, but I can say he didn’t hurt me in any way. They are a physical forward pack, but I don’t think they were trying to target anyone in particular.”

Check out Tana Umagas face when he sees that Shaw has been red carded.