Sinoti Sinoti step from another planet helps Newcastle to victory 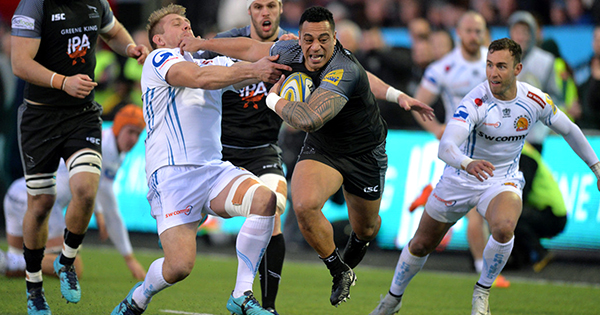 Newcastle Falcons winger Sinoti Sinoti showed how to step at a right angle on his way to scoring in their 28-20 win over Premiership leading Chiefs on Sunday afternoon. The win was Newcastle’s sixth in a row and moves them into the sixth spot on the table.

The Falcons scored two tries in three minutes, starting with this nasty bit of work from the Samoan international. The try was not without controversy, however, as it appears the final pass was forward.

Toby Flood, the wily veteran, attempted a drop-kick conversion as quickly as possible though, avoiding a TMO review of the try. His kick missed, but the try stood.

Forward or not, Sinoti outran one defender and tied two more in knots with a side-step for the ages. The defensive chase back was good, but the Samoan was too quick.

The Falcons had a comfortable 25-3 lead at halftime, scoring three tries to nil, before stoutly holding off a second half attack – in which the Chiefs came back to trail just 25-20 – to secure their sixth win in a row.

The loss was ever more bitter for the Chiefs, who were also missing some key players, as they failed to secure any points for the overall competition and their league winning streak was halted at seven.