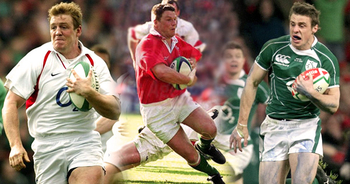 As the final weekend of the RBS 6 Nations fast approaches, we take a look back at three memorable championship deciders in the tournament’s vast history.

All eyes will be focused on the final game in Paris as Eddie Jones’ England aim for their first Grand Slam since 2003 when they play France. It is amazing to think that England, in the last 20 years, have just one clean sweep in the tournament, having fallen short on numerous occasions.

In recent years, a Grand Slam in the Six Nations has been something of a rarity, with the last one coming in 2012 when Wales went unbeaten. So let’s take a look at 3 classic deciders.

With England on the verge of the Grand Slam, it is fitting that we start with their most recent triumph. While there was nothing close about this game – England thumped Ireland 42-6 in Dubin – it was a clinical display by arguably the best team in the world at that time. England justified this status with their World Cup win later in the year.

The match is perhaps more well-known for the famous stand-off between Captain Martin Johnson and the Lansdowne Road officials when he ordered his side not to move to the customary right hand side before meeting the President.

Clear gamesmanship, that precipitated one of the most one-sided Grand Slam deciders.

Until that 2003 clash, England had developed a habit of choking at the last breath. A classic example of this was the 1999 season, where they fell short away – but strangely at home, at Wembley – to Wales.

The game is most known for the dramatic Scott Gibbs try in the dying minutes, duly converted by metronomic kicker Neil Jenkins. The Welsh triumph, their first since 1994 also gave Scotland, who had dismantled France the previous day, the last ever 5 Nations title.

Highlights below are in two parts, first half then second half, the latter featuring Gibb’s try.

It is a wonder how this championship decider has not made it to the big screen. This game had it all. A passionate home crowd begging for victory, a traveling Irish side looking for a first title in 61 years and a game that ebbed and flowed until the very last second.

Two quick fire tries from Ireland seemed to have given them the title until a late Stephen Jones drop goal looked to have denied them in the cruellest fashion.

But Ireland came back and Ronan O’Gara bagged a drop goal in return three minutes from time. Surely it was won now? It would have been if not for Paddy Wallace giving away a penalty with seconds left.

Jones had to slot the kick, but crucially it dropped agonisingly short, giving Ireland their first Grand Slam since 1948.