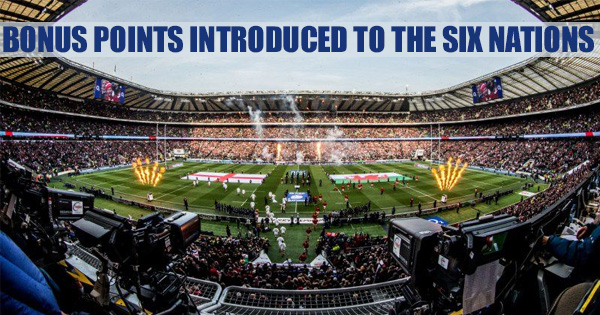 As part of their review of the Championships, the Council took the decision to implement a bonus point system to encourage and reward try scoring and attacking play.

Competition points will be awarded in all matches on the following basis:

(i) The Union that wins the Match shall be awarded four Match Points or (if it scores four tries or more in the process) five Match Points.

(iii) Unions that draw a Match shall each be awarded two Match Points and any of them that scores four tries or more in the process shall be awarded a further one Match Point.

(iv) A Union that wins all five of its Matches (a “Grand Slam”) shall be awarded a further three Match Points.

Pat Whelan, Chairman of the Six Nations said: “We have been looking at the feasibility of a bonus point system for a while and examining what kind of bonus point system would work best, given the unique properties and format of our Championships.

“We needed to ensure that whatever bonus point system we selected would work with the already proven structure of the Championships and would serve to materially improve what is already there. We are happy that the system that we have decided to trial is the one best suited to our Championships and we are delighted to be going ahead with this new development.

“We believe that the initiative will enhance our competitions for fans, teams, broadcasters and all of those for whom the Championship means so much.”

John Feehan, Chief Executive of Six Nations said: “The drama and excitement of the last weekend of the RBS 6 Nations Championship is unique and is, more often than not, driven by a number of teams on equal Championship points all competing for first place on the table.

“It is important for us to ensure that any bonus point system which is implemented would not, in any way, take away from this unique dynamic.

“At the same time, we are also conscious that we must reward try scoring and an attacking style of play that will deliver more tries and greater rewards for fans and players alike.

“We are very excited about the potential that this new development will bring to the Championships and we look forward to trialling it next February and March.”

Is this long overdue, or messing with tradition?