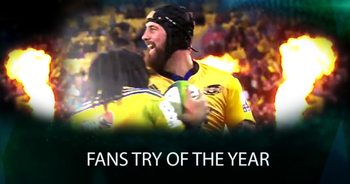 After another fantastic year for New Zealand rugby, Sky Sport NZ have put together a list of 15 outstanding scores that are the nominations for the Sky Fans Try of the Year 2015. In their own words, ten tries just weren’t enough, so here’s a look at all fifteen.

Last year Malakai Fekitoa won the award for his great try against the Sharks in Super Rugby.

The year’s nominations cover domestic to Test rugby, as well as a few women’s rugby contenders. Also, a special mention for the Samu Kubunavanua try, scored for Wanganui against South Canterbury in the Meads cup final. Mindblowing.

All Blacks hooker Dane Coles has two tries on the list, and none of them are what you’d expect from a hooker, while wingers Julian Savea and Waisake Naholo are also there with a brace.

So as you will see, there are some brilliant individual efforts, and unbelievable team tries. We’ve certainly featured a few of these before, but you probably haven’t seen them all so sit back for a sensational six minutes of attacking rugby.

If you’d like to get involved, head on over to www.allblacks.com/skyfanstry to vote. The try with the most votes will be announced as the winner at the 2015 Steinlager Rugby Awards on Friday 11 December.

Moana Pasifika to dedicate pre-season clash against Chiefs to Tonga

Moana Pasifika will use its pre-season clash against the Chiefs to raise funds for Tonga after the Pacific Island nation was rocked by a volcanic eruption and tsunami last weekend.