Sonny Bill Williams gives World Cup winners medal away to young fan, but gets given another one 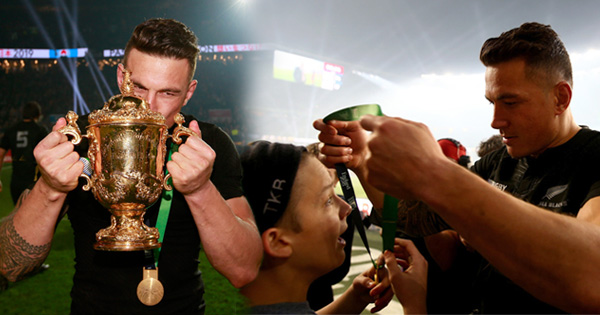 Having won the Rugby World Cup for a second time in succession, midfield star Sonny Bill Williams did something that those watching on could hardly believe. After a young fan took to the field and was tackled by security, SBW then escorted him off, and gave him his winners medal.

Young fan Charlie Line, who is 14-years-old and actually not a Kiwi, but from Somerset, was taken down during the All Blacks’ lap of honour at Twickenham. Williams helped him up and had a chat, as Liam Messam placed an All Blacks beanie on his head. Williams then placed the medal around his neck.

“I was walking around doing a lap of honour with the boys and a young fella came running out and he got smoked by the security guard, like full on tackled him. I felt sorry for the little fella,” said Williams.

“I know he’ll appreciate it and when he gets older he’ll be telling his kids – that’s more special than it just hanging on a wall. Better for it to be hanging around his neck than mine. I’m sure he’ll remember it for a while.”

The impromptu act of goodwill has gone a long way, as the video footage went viral, receving millions of views across youtube and social networks.

Williams later posted a photo on his instagram page, accompanied by the words: “Only takes one thing to change someone’s life. Enjoy it Charlie bro.”

At last night’s World Rugby Awards, the gesture was repaid as Williams was given another medal, with master of ceremonies Alex Payne saying: “World Rugby would like every winner to go home with a medal and they have found the final one.”

Williams received a standing ovation as he went up to collect the medal.

In an interview from the awards last night, Sonny Bill spoke of how proud he is to be a Kiwi, and when asked about what he did for the young fan (around 0:40 into the below video), he said “I just wanted to put a smile on his face.”

A week ago the cross code star made headlines after he was seen consoling dejected Springbok centre Jesse Kriel following the tense semi final clash. The photos also went viral as fans appreciated the gesture, which was obviously spot on when it comes to rugby’s core values.

Here is an updated, HD version of the medal incident