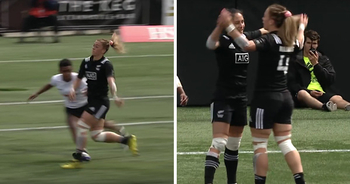 If you’re a fan of Sonny Bill Williams, you already know about the amazing skill set that he possesses. Well it seems the Williams family have plenty of athletic genes to go around, as his sister is now making a name for herself on the Women’s 7s curcuit.

Very few can represent even one sport at the highest level, but fewer still are those that can play – and play well – across multiple professional codes. If nothing else, even SBW’s haters have to admit he is a supremely-gifted athlete.

Enter Niall Williams – Sonny Bill’s sister. Niall made her debut with the New Zealand women’s 7s team in Dubai last December, and like brother Sonny Bill, she too has swapped codes. Niall was a New Zealand Touch representative, but is now very much at home with sevens.

Playing against Fiji on day one of the Canada 7’s, Williams showed brilliant field awareness and handling skills. Instead of catching a pass while on attack, she went with what amounted to a quick thinking tap pass to Shiray Tane on the wing for the try.

The moment was certainly not lost on her brother:

Now with the possibility of one or both Williams siblings getting a medal at the Summer Olympics, family bragging rights will certainly be up for grabs.

Other famous rugby siblings of note include former All Black Luke McAlister and sister Kayla McAlister. Luke is still with Toulouse in the Top 14, while Kayla is a New Zealand Women’s 7s star.

There’s also Toulon/Wallaby superstar Matt Giteau and his sister Kristy, who was also a Wallaby.

Can you think of anyone else? There are bound to be a few we’ve not mentioned.