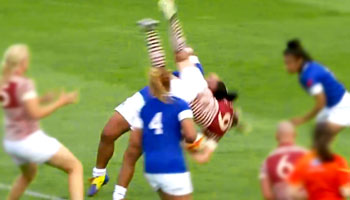 There were two suspensions that followed the opening day’s play at the Women’s Rugby World Cup in France. Mandisa Williams of South Africa was banned for punching, while Samoa’s Soteria Pulumu received a 5 week ban for a tackle. Here is a look at the latter.

Samoan fullback Soteria Pulumu appeared before independent Judicial Officer Jeremy Summers in Paris on Saturday, after having received a red card for an act of Foul Play contrary to Law 10.4(j), namely lifting a player from the ground and dropping or driving that player into the ground.

She admitted to the foul play. Having heard all the evidence, the Summers determined the player’s actions were reckless and warranted a mid-range sanction, which has an entry point of 8 weeks.

The sanction was aggravated by one week to take into account the need for a deterrent for so-called “tip tackles”.  The Judicial Officer took into account various mitigating factors including the player’s remorse, conduct at the hearing, early admission and her clean disciplinary record.

The sanction was reduced by four weeks to a final sanction of 5 weeks.

In the context of the tournament, Pulumu will miss the remaining matches at the tournament and is further suspended from 18 August to midnight on 24 August 2014. She has the right to appeal, but after seeing the footage (below), there is probably not much of a case to be made.