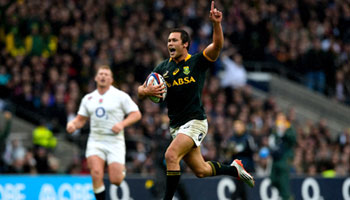 Springbok coach Heyneke Meyer has lauded his team’s 31-28 victory over England in the wet weather of Twickenham on Saturday. The much needed win stretches their unbeaten run against England to 12 matches, dating back to November 2006.

The fifth consecutive win at Twickenham holds the Springboks in good stead heading into a Rugby World Cup year whereby the tournament will be held in the UK. While their loss against Ireland a week prior was dissappointing, Meyer was proud of the three-try effort in the rain.

“I’m very proud of the guys – it was a clinical performance and we played tactically very well in the conditions,” said Meyer. “Even though it was wet and the ball was quite slippery, we still scored three tries, while there could’ve been a fourth.

Jan Serfontein scored with an intercept, then just after halftime Cobus Reinach crossed after a brilliant bit of play by Pat Lambie and fullback Willie Le Roux. Man of the Match Schalk Burger also crossed for a well constructed try off the back of a maul, despite being down to just 7 forwards.

“I also thought the players did very well to keep their composure and take back the lead after England scored two quick tries early in the second half,” Meyer said of England’s excellent comeback, which brought them level at 20-20 after two quick, powerfully taken tries.

Burger, whose comeback from illness and injury culminated in a start for the Springboks, has now been released from the squad and flew back to South Africa yesterday.

“A decision was taken prior to the tour that Schalk will be released from the squad on Sunday,” said Meyer ahead of the upcoming Test against Italy in Padova. “We still have good depth at loose forward and can also look at bringing in reinforcements if necessary.”

He added that the challenge now is to build on this performance and keep lifting the intensity.

“I think as a coach you accept that if you win the players get the credit and, if you lose, the coach gets the flak,” he said. “It’s been a tough run against two world-class teams, but we need a win.”