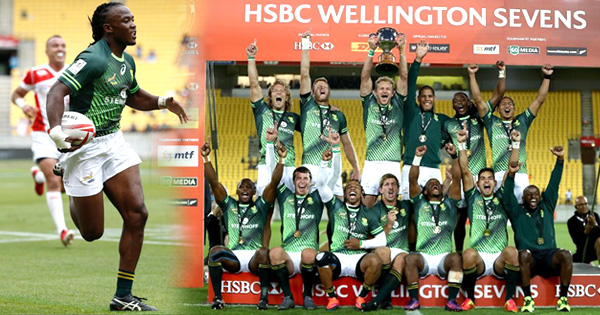 Seabelo Senatla broke the South African try scoring record as the Blitzboks beat Fiji twice in a weekend to win the 2017 Wellington 7s. Their 26-5 Cup Final win, their first series win in Wellington since 2002, cements their spot at the top of the overall table after three rounds.

Senatla, who will be stopping 7s to play in Super Rugby, was named HSBC Player of the Final as well as DHL Impact Player on a weekend that saw him beat Fabian Juries’ try scoring record. He now has 180 career tries to his name.

“I got burned early on (in the final) which doesn’t happen very often, but got back to my structure,” said Senatla post match.

“It was all about keeping calm and starting again. We have a great bond, the players play for each other. We have one big happy family, and we put our bodies on the line for each other.”

Scotland finished in third place after beating Canada 28-22 in the bronze final, while Kenya won the Challenge Trophy after beating Australia 19-17.

– View Highlights from Day One

The series moves to Sydney next weekend, where the Women’s series will also take place.