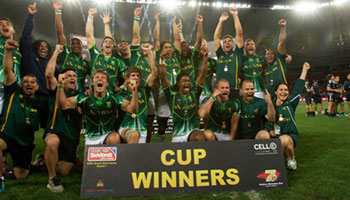 South Africa paid tribute to the passing of Nelson Mandela in the best way possible, beating old rivals New Zealand 17-14 in the Final of the SA Sevens. It was their first ever series win on home soil, at the aptly named Nelson Mandela Bay Stadium.

New Zealand shot off to a 14-0 lead as it looked like the emotion of the weekend appeared to get the better of the hosts, but an inspired comeback and brace by Branco du Preez changed that.

The All Blacks Sevens team were aiming for their fifth consecutive title in South Africa, but after a few days that saw the passing of the great Madiba, as well as former boxing world champion Baby Jake Matlala, the victory for the hosts came at a poignant time.

“It was a very emotional weekend for all South Africans,” said South Africa Sevens coach Neil Powell. “We realised that we needed to do it for his memory and for ourselves. We could only do it by playing as a team and playing for each other. It is an unbelievable feeling.”

New Zealand are still top of the overall series standing with 58 points, but South Africa are now just two behind them, with Fiji in third place on 48 points and England in fourth on 40 points.

The series now moves to the USA for the Las Vegas Sevens in late January.

View highlights from Day One
View the reaction of the South Africans, who ‘did it for Madiba’

Credit: Thanks to the IRB for the coverage

Day One highlights from the South Africa Sevens in Port Elizabeth

In the changeroom with the Springbok Sevens team, who dedicated their win to Nelson Mandela.