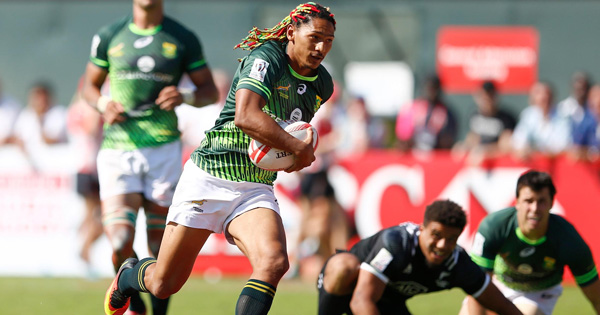 South African rugby fans finally got something to cheer about after the Blitzboks first thumped New Zealand in the quarter finals then Wales in the semis, then took care of Olympic Gold medalists Fiji with a 26-14 victory in the Dubai 7s Cup Final.

The Blitzboks scored early tries in the final through Cecil Afrika and Branco du Preez to put them into an early lead, however Fijian captain Osea Kolinisau fired back to make it 14-7 at half-time.

Straight from the restart Jerry Tuwai touched down, with the conversion levelling matters at 14-14, but shortly afterwards HSBC player of the final Chris Dry edged South Africa ahead.

That score gave his team the momentum and it was a final try from Seabelo Senatla that sealed the match, bringing his tally to a remarkable 11 tries for the tournament.

“It was a big one for me last year, but I needed to start all over again,” said the incredibly fast World Rugby Sevens Player of the Year.

“I am very happy what we did this weekend. These guys were awesome and continued to keep feeding me in space, hats off to all on my inside that are doing all the hard work.”

Speaking afterwards, captain Philip Snyman said: “We just needed to stick to our game plan and structure and that’s exactly what the guys did. We never let Fiji into the game and then they were playing catch-up rugby, which I think worked to our advantage.

“We can be positive going into our home tournament next weekend in Cape Town, but we need to start all over again and fix a few things that went wrong. We need to recover well over the next few days.”

England and Wales faced off in the battle for bronze, with England coming out on top, 33-10.

The second round of the HSBC World Rugby Sevens Series moves to Cape Town next weekend where the home side head into the weekend as series leaders.