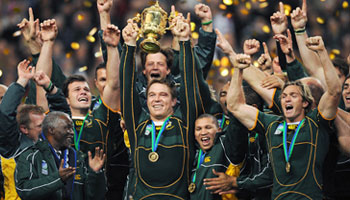 In a tight and tense affair in Paris on Saturday night, the Springboks came out on top to claim the William Webb Ellis trophy back from England – the trophy that they first won 12 years ago at Ellis Park in Johannesburg.

In a game that was dominated by penalties, top points scorer of the world cup Percy Montgomery slotted four out of four, with young Francois Steyn successful at his second attempt from just inside the half way line.

Wilkinson didn’t have as big an impact as it was talked up to be for England, only getting two kicks over and missing two drops.

The Boks dominated the lineout early on which put pressure on the English, although they came back well in that department. In the other set piece phase of the game, the scrum, England commanded the Boks’ respect as they really put the heat on.

CJ van der Linde and the Boks soon rectified the situation though and competed well throughout the game against the powerful English front row.

English center Matthew Tait had a few great runs, one of which saw Victor Matfield making a try saving tackle just meters short. The ball was quickly recycled though and spun out wide to Mark Cueto who dived over the line under the close attention of big Danie Roussouw for what looked like a try.

Replay after replay were shown to TMO Stuart Dickinson, and after looking at it one last time in super slow mo, it was clear that the tip of Cueto’s boot had scraped the white line, therefore ruling out the try.

It will no doubt be an incident that will be talked about for years to come. If you’re English, you’ll say it was a try. If you’re South African or neutral, his foot scraped the line and it wasn’t a try. To harp on about it would be foolish, as nothing will change it now.

It certainly wasn’t a bad decision as the video footage is there for all to see. It was extremely close and could have gone either way. The majority of people will agree that it is fair to say that the line was touched.

I’ll get the clip up here soon for you guys to discuss, dissect, and scrutinize.

England on the other hand put up a tremendous fight and halfway through the World Cup nobody would have believed they’d be there. Hats off to Phil Vickery and the boys. Slated by their press, they came back well and for that deserve to be applauded, respected and commended. True guts and self belief will get you very far in life, and in this case, in rugby.

To South Africa and the Springboks, we’ve waited long for this and the scenes of nationwide unity on Saturday night around the country brought a tear to my eye. For a country torn apart by racial divide in the past, we came together as one to celebrate the greatest victory of them all. Congratulations to the new World Champions.


The tournament is over, but we’ll continue to post great World Cup footage from all teams, including Tries of the Tournament, funny incidents, and other video compilations. Currie Cup, Air New Zealand Cup, the Guiness Premiership, Magners League and French League’s footage will all be covered in the upcoming months also, as well as other classic clips from around the world.