Springboks edge All Blacks in another thriller between the two rivals 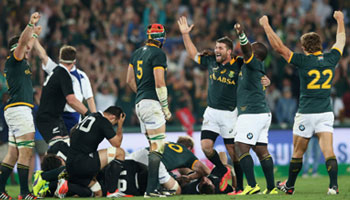 The battle between the top two teams in the world lived up to it’s billing yet again, but this time it was the Springboks that beat the All Blacks 27-25, after another epic Test match. A long range penalty by Pat Lambie secured the win at the death.

The Springboks lived up to their intentions of playing a more expansive game, as both sides played positive rugby in a highly entertaining first half. The home side scored three times, including a brace for young Handre Pollard who not long ago was named the IRB Junior Player of the Year.

Before that Francois Hougaard got on the end of an excellent length of the field effort, with the attacking mindset under coach Heyneke Meyer paying dividends.

For the visitors Julian Savea was lethal, beating tackles on a number of occasions. When he isn’t bumping them off, he kicks well, as seen with the first half try he set up for Malakai Fekitoa.

This was a bruising, epic battle and while the Boks led 24-13 at the break, the World Champions wrestled their way back into the match in the second half, scoring two tries to take a 25-24 lead with ten minutes left.

A Schalk Burger carry prompted a no arms tackle by Liam Messam, who appeared to have no malicious intent but did make contact with Burger’s sizable head as he ducked into the tackle. The footage was missed by the officials but it was beamed onto the big screen, and around the world, and the crowd soon got referee Wayne Barnes’ attention.

As with protocol, he opted to take a look at it, and after speaking to the TMO, made the call to penalise Messam, bringing the play back to 55m out, from which then replacement Lambie had an opportunity to slot three points.

He did so on the Highveld with relative ease, keeping his head down beautifully and taking the lead for the home side, sending 61000 fans at Ellis Park into raptures.

“Pat never answered me on how far he could kick when I asked him at the captain’s run, so I was not sure if he could kick those long ones,” said coach Heyneke Meyer of the flyhalf.

“I am very pleased with Pat, he really worked hard. Handre was awesome as well and we now have great depth at flyhalf, considering we have Morne Steyn and Johan Goosen as well.

He also spoke about the incredible support in Johannesburg, and the respect between the teams.

“I have been involved in rugby for almost 30 years and this support was unbelievable. We saw the crowd support on the way into the stadium and the national anthem was awesome.

“It was an unbelievable test match. At home you have to pull these close matches through. We are relieved that this is done now. The win was due. We appreciate the compliments the All Blacks gave us afterwards, we do respect each other,” he added.

Duane Vermeulen was all over the park, despite being out injured for the entire week. He played with broken ribs, only being passed fit on the morning of the Test. He earned Man of the Match.