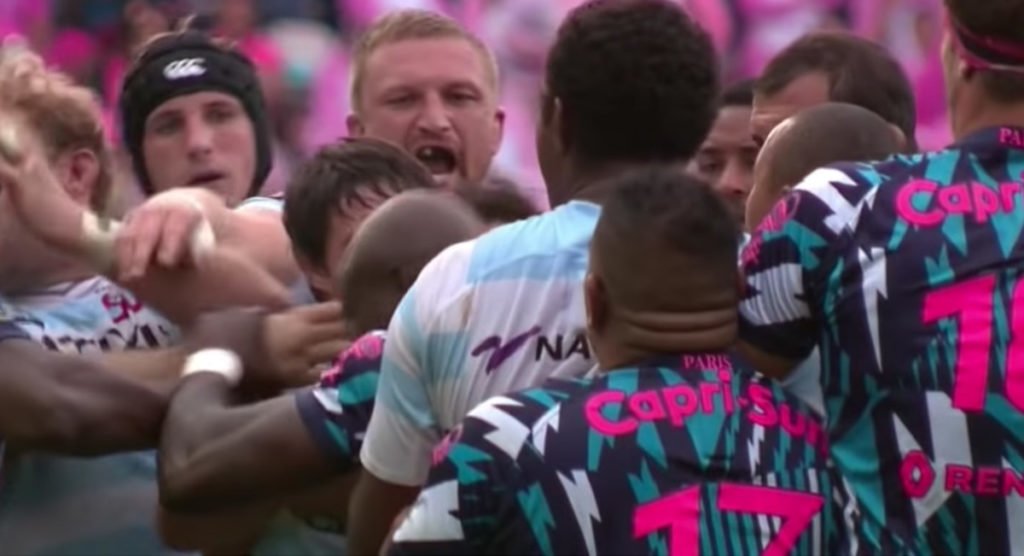 Racing 92 have pulled to within a point of Stade Francais after their hard-fought 17-16 win on the road in Sunday’s Paris derby. One of the major talking points from the match was this sneaky punch from winger Djibril Camara to Antoine Claassen’s face.

Stade was clinging to a two-point lead midway through the second half when Camara delivered the sucker-punch. He was subsequently sin-binned and can perhaps count himself lucky it wasn’t a full red.

Although there wasn’t much force behind the punch itself, the rules are quite clear about striking another opponent. Rule 9.12 regarding foul play states: “A player must not physically or verbally abuse anyone. Physical abuse includes, but is not limited to, biting, punching, contact with the eye or eye area.”

In this case, the referee deemed it to be a yellow card only.

Finn Russell was able to step up and land the penalty that put Racing into the lead for good. Stade were able to get one last chance, but Jules Plisson missed his penalty attempt with roughly 10 minutes to play. It will be a tough pill to swallow for Stade as their ill-discipline had a major hand in the loss. Plisson could also be up against some criticism, as the man he replaced – Morne Steyn – was perfect from the tee.

Speaking about the incident and general play of his team, Stade captain Yoann Maestri said: “We were too undisciplined but that is linked to the quality of Racing who put us under pressure and frustrated us in many areas.”

With eyes towards Sunday’s derby, top of the table Clermont were able to extend their lead after their big 28-8 win over rival Toulon.