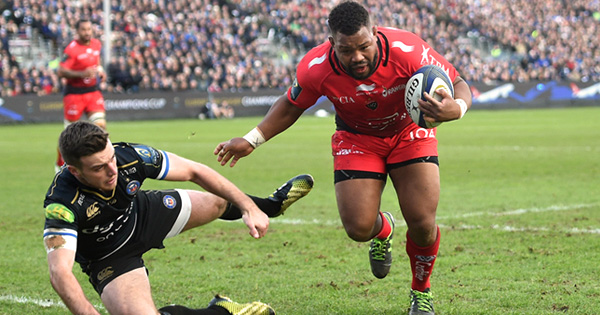 Toulon secured their place in the Champions Cup quarter final with victory over Bath on Sunday, ending in second place in Pool 5 after Wasps snuck ahead to top the group. Steffon Armitage finished off a well deserved try with a huge fend on Bath number ten George Ford as he went over.

Bryan Habana crossed for trademark poacher’s try in the second half, as Ford was again the recipient of a big hand off. You can see that try and all the other highlights in the video below.

Ford found himself on the wrong end of a big carry a few weeks back too. On that occasion it was Wasps number eight Nathan Hughes who bumped him off.

Wasps and Toulon both finished on the same number of points in Pool 5, but because Wasps beat the three-times champions in round 2, they top the group and get the home quarter final, against Exeter Chiefs. Toulon will have to travel to French rivals Racing 92 for their knockout game.

Two years ago Armitage had another big fend on the way to crossing for a try, that time to score against Perpignan and with a little more work to do.

See more great fends and handoff’s in our related posts below this.

We’ll have more clips and highlights from the round in due course. As ever, feel free to get in touch with requests or submissions via Twitter, Facebook or email