Stephen Ferris scores a powerful try against the Scarlets 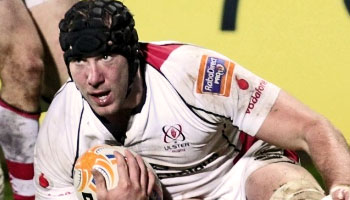 Stephen Ferris scored two tries as Ulster beat Scarlets 24-17 at Ravenhill in the RaboDirect PRO12 over the weekend. His first was well taken, but the second was a thing of beauty as he showed the kind of pace and power that we’ve come to expect.

It was just a few week’s back that we were singing the praises of the man as a big hit on Lee Byrne was featured here on the site. Today was look at the other side of his game as this Man of the Match performance included a wonderful try out wide.

Ulster needed to get their season back on track with the next round of the Heineken Cup coming up, and this win over Scarlets will give them heaps of confidence, especially considering the form of the Welsh side of late – eight successive wins in all competitions.

In didn’t start well for them as Sean Lamont scored early and then they were ten points down, but a yellow card for the visitors allowed Ulster to get going and Ferris scrossed for his first try, with the home side trailing by two points going into the break.

In poor conditions Ian Humphreys managed to score 14 points with the boot, while Ferris’ second try included a dummy, bump off of a hapless Rhodri Williams, and a clinical sidestep of the cover.

If you spotted anything else you’d like featured from the RaboDirect PRO12, or anywhere else, please make sure you get in touch with match and incident details via our contact page.