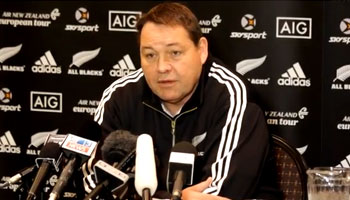 All Blacks coach Steve Hansen spoke to the media earlier today ahead of his team’s Test against England at Twickenham on Saturday.

Hansen addressed the Andrew Hore suspension for the strike on Bradley Davies, spoke about where the strengths are in the England team, and also said that he thinks flyhalf Owen Farrell must be a tidy player, considering he was nominated for IRB Player of the Year 2012.