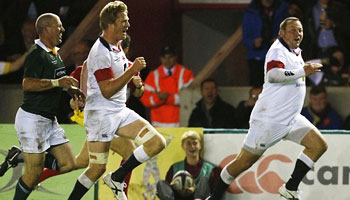 The England and Australian Legends met for a fun run around at the Twickenhham Stoop on Thursday night in honour of the ten year anniversary of the 2003 Rugby World Cup final. Steve Thompson scored this wonder try, then had a pint or two to celebrate.

A few days between the meeting of the two sides at Twickenham, this game set the mood and as it turns out, the final result was the same, as it was back in Sydney in 2003.

The Aussie side missed a few of the genuine legends that obviously couldn’t make the trip across, but it was good to see the likes of Andrew Walker on show. Unfortunately he was partly to blame for the moment of the night however, as Thompson rolled back the years to score this belter.

A former loose forward turned hooker, Thompsons sidestep, acceleration and dummy even impressed Jason Robinson, who was up there in support, and incidentally, had a great night himself. Stirling Morlock wasn’t playing, but was sideline and loved every moment of it.

“It’s great that the Australian legends came here tonight. A big part of rugby is being fierce competitors on the field and great mates off it,” said the former Wallaby captain.

“Rugby is one of those sports where you can have a beer with your opponents afterwards and share a few war stories. This game has given me so many great friendships with people from all walks of life. Tonight was all about raising money for charity and reconnecting with guys who you haven’t seen in a long time.

“It was a fantastic match and the legends set a really high standard – many of them showed they’ve still got the X factor. It was also a pretty nice finish for the home crowd to see Steve Thompson run the length of the pitch, throw a couple of dummies and score in the corner,” Mortlock added.

Proceeds from the match, which the England Legends won 17-12, will go to various charities.

Below is a look at the try as well as chats with Thompson, Robinson, Phil Vickery and Andy Gomarsall, who as part of the great coverage on the night, was mic’d up so we could hear him.