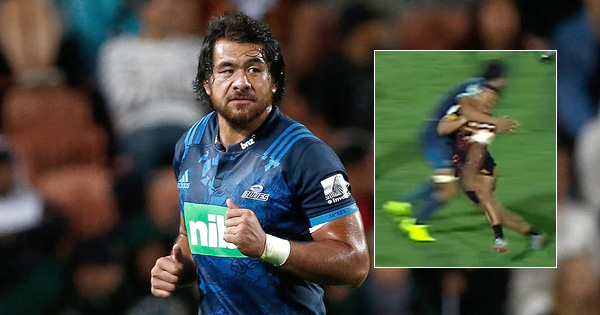 Blues loose forward Steven Luatua was shown a straight red card for this high tackle on Tim Nanai-Williams during the round two Super Rugby match between the Chiefs and Blues in Hamilton on Friday. The Chiefs won 41-26, with six great tries.

The All Black flanker is ‘alleged to have contravened Law 10.4(e) Dangerous tackling of an opponent‘. He will face a hearing on Sunday 5 March, with the case to be considered in the first instance by the SANZAAR Foul Play Review Committee of Nigel Hampton QC, Stefan Terblanche and John Langford.

Luatua appeared to set himself for the challenge then simply didn’t pull out of it, despite Nanai-Williams clearly not receiving the ball.

Under the old laws Luatua’s tackle might have been considered clumsy and reckless but not malicious, therefore perhaps we would have only seen a yellow card. But with the new focus and zero tolerance approach to head-high tackles, this was always going to be a red.

CATCH UP: Super Rugby Round 2 highlights