Stick Phil Vickery on the wing - Great prop try from 2002 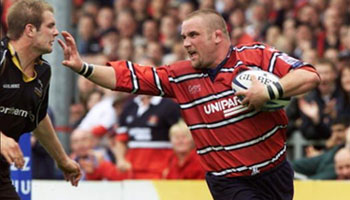 Since the weekend’s Test between the British & Irish Lions and the Springboks in Durban, Phil Vickery has had his reputation diminished slightly as he took a mauling in the scrum. On the wing, Ugo Monye has suffered a similar fate following his lack of finishing.

The pieces of the puzzle now fit, and after seeing this try from 2002, it all makes sense stick big Phil out on the wing. With finishing like this, you cant go wrong.

It was May 2002 and the Zurich Premiership (as it was known then) Quarter Final between Gloucester and Newcastle at Kingsholm.

The home side, Gloucester, scored nine tries as they romped to an emphatic 60-9 victory, scoring some fantastic tries, but none more memorable than this great effort from their captain courageous, Phil Vickery.

Some superb lead up play from the scintillating James Simpson-Daniel allowed Vickery to be released on the left wing. Showing the Shed his impression of a top class left winger, the big guy fended off the attention of Gareth McClure, then ran over Liam Botham as he dived over for a quality try.

Hes had a long and illustrious career, so it would be a shame for the 33 year old to be remembered for what happened at the hands of The Beast last Saturday.

This try sheds a little light on the situation, and theres no doubt that Vickers would have easily finished both those chances that Monye had.

The Lions play the Emerging Springboks in Cape Town later today. Take a look at our Fixtures page for upcoming matches, as well as links to highlights from the rest of the tour.