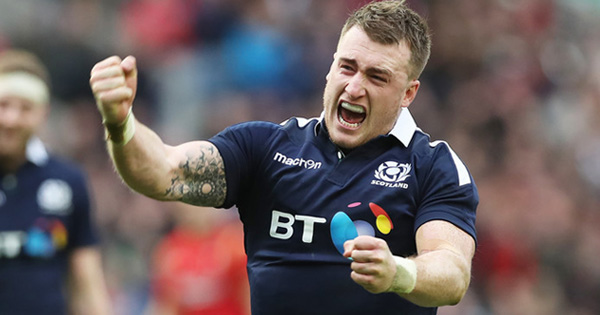 Scotland fullback Stuart Hogg has been named the RBS Player of the Championship for the second year running after another sensational Six Nations tournament. Watch the moment he found out with his clubmates, as Gregor Townsend announced the award.

The results are in and Hogg has been voted the 2017 RBS Player of the Championship. Securing over 24.6% of the public vote, the full back received the backing of 29,734 fans.

In addition to the public vote, Accenture, Official Technology Partner of the RBS 6 Nations, has been working closely with Accenture Analysis Team member, and former South Africa and Italy coach, Nick Mallett to draw up the final shortlist of 12 players.

The shortlist was based on a specific algorithm created by the technology partner where players at every RBS 6 Nations match this year have been awarded (or deducted) points based upon several different performance categories which cover all aspects of the game.

Hogg may have been a fair distance ahead, which reflected his second standout RBS 6 Nations in a row, but CJ Stander came in second place with 14.9% of the vote for his significant role within the Irish Squad.

Third place was awarded to Louis Picamoles with 12.8% of the votes, followed by Joe Launchbury (8.9% of the vote). Finn Russell’s notable performance was recognised with the Fly Half finishing 5th (8.3 % of the vote), ahead of scrum half, Conor Murray in 6th with 7.9 % of the vote.

Hogg, who made his 53rd appearance for Scotland during the Championship, commented: “To receive this award again is an absolute honour, particularly when you take other players on the shortlist into account.

“I’m delighted to be awarded the RBS Player of the Championship Trophy and would like to take this opportunity to thank everyone who voted and the fans for their continued support throughout the Championship.”

Below is the amusing moment he found out, and then a short highlights video