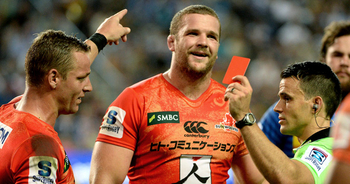 Sunwolves lock Tim Bond has been banned for four weeks following a sending off against the Stormers in Round 7 of Super Rugby on Saturday. Bond tackled Cheslin Kolbe slightly late but more significantly, hit him in the face with his shoulder.

Bond pled guilty to contravening Law 10.4 (e)* Dangerous tackling of an Opponent at Newlands in Cape Town with ten minutes left of their match, that the Stormers won 46-19.

Following the disciplinary hearing, SANZAAR Duty Judicial Officer Michael Heron QC stated that Bond explained he was trying to tackle Kolbe with a ‘smother tackle’, and tried to pull out when he knew the ball was passed.

Heron went on to say that the tackle was high and late and with only one arm engaged. While it was not intentional or pre-meditated, it was reckless as his shoulder connected with Kolbe’s head, leading to the Stormers fullback having to leave the field.

“I indicated that I saw this as mid-range, and warranting an entry point of 6 weeks under Appendix 1,” stated Heron, also adding that Bond checked on Kolbe and apologised.

“In the circumstances, particularly in light of the early guilty plea, I was willing to discount the relevant sanction to a period of four weeks’ suspension, through and including the playing weekend of 7-8 May.”