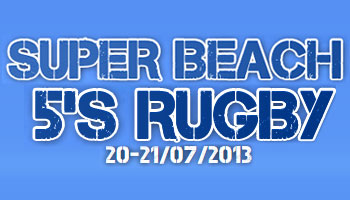 Next weekend sees the 2013 Super Beach 5’s hit stunning Lignano in Italy, as teams from around the world converge on a beautiful part of Europe to play the fastest version of the sport. This year we’ll be live streaming direct from the tournament.

Officially recognised by the IRB since 2010, Beach 5’s is growing rapidly with standards and popularity on the rise. Each year teams from the southern hemisphere also take part, and this year one from Tonga and one combined New Zealand, Samoa and Fiji team will be there.

Where is Lignano Sabbiadoro?

Situated approximately 40 minutes along the coast from Venice, it’s a tourist hotspot and one of the most visited summer destinations in Europe. A perfect setting for a beach rugby tournament.

The 12 teams taking place will be playing for two of the most prestigious trophies in world Beach 5’s – the 13th Lignano International Cup, and the 2nd EBRA European Beach Rugby Club Cup.

It takes place next weekend, 20/21 July, so if you’re able to attend, go for it. If not, we’ll be live streaming it so look out for the notifications and check it out. Maybe next year we’ll see you there. Find out more info at Beachrugby.eu, or via Twitter and Facebook.