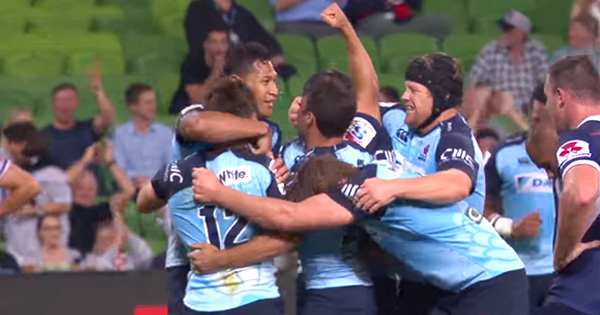 Round 5 of Super Rugby kicked off with matches in Christchurch and Melbourne, where we saw one convincing win that featured a bizarre try, and a contest that was truly a game of two halves. Catch up on the highlights below, with more to be added as the weekend goes by.

*Highlights from all matches are now updated below

The Sharks came out on top in a see-sawing tussle with the Cheetahs on Saturday, scoring four tries in a 38-30 victory in Bloemfontein.

The Lions moved to the top of the South African group after a strong first half in Port Elizabeth propelled them to a 42-19 win over the Kings.

The Highlanders came from 10-0 down to battle past the Brumbies 18-13 in their Super Rugby meeting in Canberra on Saturday.

The Blues ended a run of three straight losses as they claimed a 38-14 bonus-point win over the Bulls in North Harbour on Saturday.

The Waratahs came back from 25-6 down at half-time to overcome the Rebels 32-25 on the final whistle in a thrilling Super Rugby clash in Melbourne.