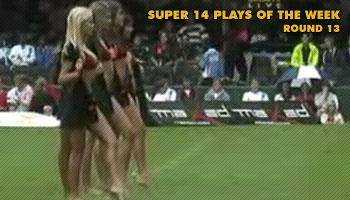 This weeks edition of Plays Of the Week featured some rather comical happenings. Scott Hamilton taking one on the head was definitly worth watching twice, and Mexted’s ‘Hore’ comment also provided a chuckle.

Doug Howlett once again put in a massive hit, this time against the Bulls. In the same match, the bearded Bulls super-sub Jaco van der Westhuizen sparked a fantastic 90 meter try.

For the Hurricanes, Jimmy Goperth scored a quality dribbling try that Barcelona star Lionel Messi would have been proud of.

In Durban the hail came down hard, which had me running for cover. I hadn’t planned on getting ice in beer up until then. Hats off to the Sharks & Lions players for continuing the game though, because believe me, it was coming down hard!

This weekend will determine the semi finalists so it should be a real cracker round.

Enjoy the Plays of the Week Round 13 for now though.