Tackler almost hurdled but still sent off for dangerous play 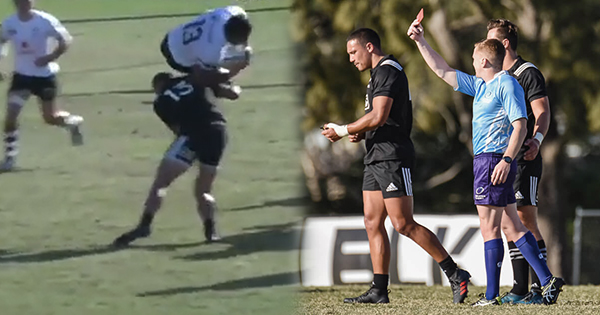 New Zealand U20 Billy Proctor received his marching orders for this tackle in the first quarter of the clash with Fiji U20s in the Oceania Championships on Tuesday. The contentious point was that he was left with little option after the Fijian attacker jumped into the tackle.

Despite the deficit, New Zealand U20s went on to win  55-15, adding to their first-round victory of 97-0 against Tonga on Friday night.

Outside centre Proctor, from Wellington, was sent off in the 18th minute by referee Damon Murphy after he tackled opposition back Ilikena Vudogo in the air, causing an awkward landing.

Vudogo had leapt high for a wayward pass, almost hurdling Proctor in the process, with the latter simply hanging on with very little time to pull out of the challenge.

Upon conferring with his assistant referee on the sidelines, Murphy felt that the tackle was dangerous enough to warrant a red card, due to the tackle in the air and the way that Vudogo landed.

It seemed like a tough call but referees have been put in a tough spot by the powers that be.

The New Zealand win sets up their meeting with rivals Australia, who beat Tonga 91-7. The clash is this coming Saturday 5 May, to be played at Bond University Rugby Club on the Gold Coast.