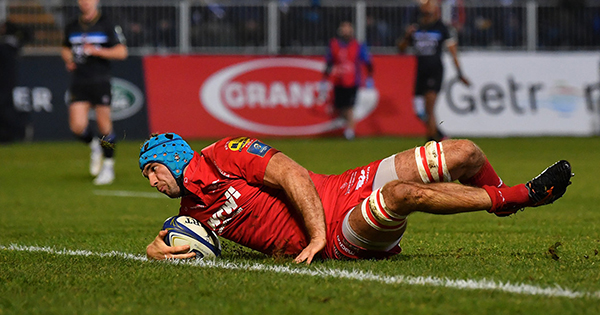 Scarlets second rower Tadgh Beirne has been voted as the recipient of the Try of the Season for the European Champions Cup, following this outstanding finish against Bath in Round 5 of the tournament. Beirne’s try beat out five other nominees for the award.

The fans vote combined with that of Brian O’Driscoll to come up with the final winner, as the Scarlet’s length of the field try pipped excellent scores from Andrew Conway, Nemani Nadolo, Leone Nakarawa, Tommy Seymour and Flip van der Merwe.

There were over 3000 public votes castto decide the eventual winner.

The ball travelled from deep in the Scarlets half, through a few phases, before Beirne’s perfect sidestep to beat Anthony Watson and dive over the try line for a memorable score.

Three-time European Cup winner Brian O’Driscoll was in little doubt about the winner.

“This was an incredible team try combining wonderful offloading, clever angles of running, ball handling of the highest order, eventually finished off by a second row flat-footing Anthony Watson with a step any outside back would have been proud of,” he said.

The Irishman, who will play for Munster next season, was recently included in Joe Schmidt’s Ireland tour squad so will be looking to repeat this kind of form when they take on the Wallabies in a three-Test series next month.

After over 3,000 votes and the expert opinion of @BTSportRugby’s @BrianODriscoll, @Scarlets_Rugby‘s try that was finished superbly by Tadhg Beirne, is the #ChampionsCup Try of the Season. pic.twitter.com/0JMdsn4uFk