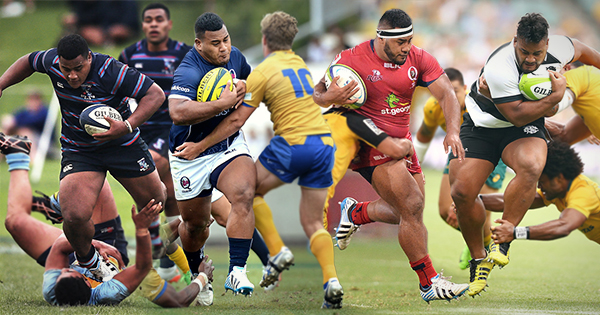 He’s already played against them with the Barbarians, but this Saturday Taniela Tupou will wear the colours of Australia as he starts on the bench for the Wallabies against Scotland. It’s been a meteoric rise for the 21-year-old, a path we’ve all followed in recent years.

The young tighthead prop, who burst onto the scene as a devastating runner in schoolboy rugby, is set to make his long-awaited Test debut after completing his three-year residency requirement.

“I’m lost for words. I was in tears when I found out,” said Tupou of his selection.

“All I wanted to do was play for Australia from those early times growing up and always watching the Wallabies play the All Blacks on TV. I did my schooling in NZ but it didn’t change me wanting to play for the Wallabies.”

When asked by a journalist why he wouldn’t want to play for his home nation of Tonga, he said:

“I’d love to play for Tonga one day and if we had rugby league rules I could play for the Wallabies and then play for Tonga in two years,” he said with a smile.

The match against Scotland will also be historic for a man with just a few more caps than Tongan Thor, as Stephen Moore plays his 129th – and final – Test in a career that has spanned 15 years.

The hooker is set to retire from all forms of the game after Saturday’s Murrayfield clash.

After a strong showing against New Zealand, Scotland will be a big challenge for the Wallabies, who went down 30-6 to England at Twickenham last weekend.

In the last six games, Australia and Scotland have had three wins apiece, with just seven points splitting the two sides in their last three meetings. Their most recent of which was a 24-19 win to Scotland in Sydney in June of this year.

Coach Michael Cheika, who faced no punishment for his antics during the England match, was last night urged to “be aware of the risks during matches when he knows he will be being filmed and potentially broadcast, and where possible to moderate his conduct and language accordingly”.

He will be hoping for a big impact from Tupou from the bench in the Scottish capital.

Below is a mash-up of some of Tongan Thor’s best moments from school, club and Super Rugby. You can view more of him in action in recent times in our Related Posts below this

Taniela lost for words at prospect of Test cap: