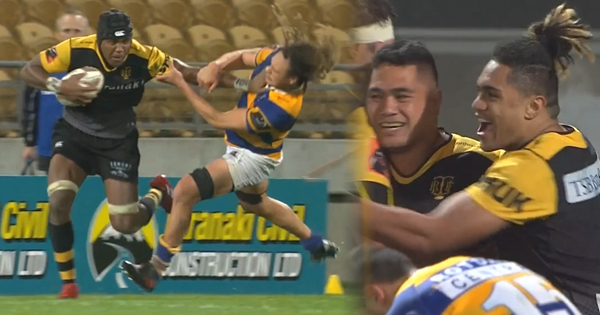 Taranaki produced a convincing 29-7 win over Bay of Plenty in New Zealand’s Mitre 10 Cup earlier today, saving their best try for last in New Plymouth. The tryscorer was Sione Lea, who scored his first try at that level, on the occassion of his 50th cap.

It was a true team effort though, starting deep in their own half and was actually scored with just 14 men on the field, after flanker Lachlan Boshier had been yellow carded for a professional foul.

From the penalty, Bay of Plenty opted for a scrum 5 meters out, but Taranaki won it as it popped out and some superb individual pieces of play then resulted in them streaking away downfield.

First it was a lovely offload in a double tackle by Manasa Mataele, then a powerful run and fend down the wing by flanker Pita Sowakula (who actually used to play wing back in Fiji), which led to Marty McKenzie showing great skill to pick up a loose ball. One quick phase later, and Lea was in for the classic team try.

The win leaves Taranaki third in the Premiership behind unbeaten Canterbury and North Harbour.

It comes with some bad news though as one-Test All Black Charlie Ngatai, who had previously taken a year off of rugby due to head trauma issues, left the field after a nasty headclash.

The skipper on the night failed the subsequent HIA (head injury assessment) test, so may be in doubt for the rest of the season, if not longer.

Bay of Plenty scored a late consolation try, but it was this team effort from Taranaki that will be remembered as one of the moments of the match.