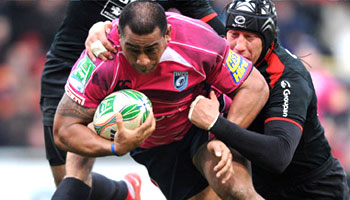 ‘Tis the season to be merry, so instead of keeping an unsavoury incident as the main focus on here, I figured it’s best to get this refreshing clip up as soon as possible.

It also involves a prop, but this time it’s of a more positive nature as Cardiff Blues front rower Taufa’ao Filise scored a great try against Toulouse at the Stade Municipale on the weekend.

While Toulouse were too strong for the visiting Blues, who wore pink, it was Filise who scored the try of the match as he collected a neat pass from flyhalf Sam Norton-Knight before charging towards to tryline.

Vincent Clerc flew past him, not looking all that interested in getting in the way of the big guy, while Patricio Albacete tried in vain to pull back the runaway train.

It’s good to talk up the front rowers, as they generally do a lot fo hard work, with little to show for it. Plus, there’s nothing better than seeing an over-sized, hard working ox put the foot down and gas his way to the tryline.

Yes, clichs aplenty, but it was a great try to watch, and it’s a fun time of year after all.

The comment at the end is a reference to one of Jonah Lomu’s tries against France in the 1999 World Cup semi final, where he wreaked havoc as he headed for the whitewash. You can watch that again by clicking on the related links below this clip.

We’ve seen a few great prop tries over the years, and always done what’s possible to get them archived right here on RD. While this certainly isn’t the best ever, it definitely deserves a place on the list as a great prop try.