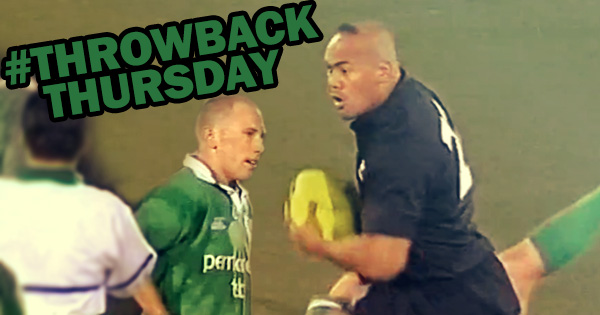 This week the world of rugby remembers former Springbok Joost van der Westhuizen, who died on Saturday after a long battle with Motor Neuron Disease. The scrumhalf is well known for, amongst other exploits, his heroic tackle on Jonah Lomu in the 1995 RWC.

With it, the tackle brought back memories of another relatively diminutive figure renowned for occasionally beating the odds.

Ireland scrum-half Peter Stringer surprised not only the big All Black himself, but probably the whole of Carisbrook when he made this terrific tackle in the first Test in 2002.

Seeing Lomu pouncing on a loose ball and running into space was probably every rugby player’s worst nightmare, regardless of what size they were. But Stringer, of all people, showed that by getting your tackling technique right, it doesn’t really matter how big or fast the opponent is.

At just 1.7m tall and under 75kg’s, Stringer got his arms around the ankles of Lomu, making sure the winger was brought down immediately, stopping the typically threatening charge.

Unfortunately, this great story is ruined by the fact that Lomu presented the ball perfectly, allowing Aaron Mauger to stab a kick through and Leon Macdonald to pounce for the winning score.

The game ended 15-6, but Stringer’s perfect tackle will go down in the annals of rugby folklore.