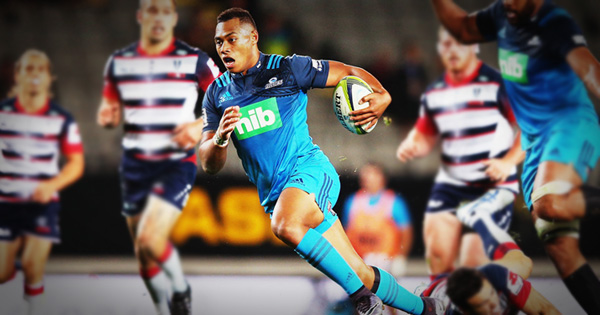 Up-and-coming Kiwi winger Tevita Li played his final game for the Blues a fortnight ago after he announced he was joining defending champions the Highlanders for the 2017 Super Rugby season. He hopes the move will help him reach even greater heights.

On hand to cover the announcement in New Zealand was The Crowd Goes Wild, and reporter James McOnie made sure young Tevita was as prepared as possible before his move down south in an entertaining segment.

Li has been one of the stand-out players for an out-of-sorts Blues side this year, scoring four tries and beating over 30 defenders.

The Auckland-born 21 year-old made his Blues début against France in 2013 while still attending Massey High School, and is tipped for future stardom in the Black of New Zealand.

He’ll be with some familiar faces once in Dunedin. Both Waisake Naholo and Malakai Fekitoa made the move from the Blues and will no doubt offer Li the sort of running rugby he has become known for in recent years.

The Blues themselves will look to use the 2017 season as a year in which to bounce back after another fairly lacklustre campaign. They finished 11th with just eight wins but the arrivals of Sonny Bill Williams and Augustine Pulu should help to restore some confidence among local supporters.

For Li however, his deal – currently just a one-year contract – is likely to be an important step up for the former U20 All Blacks winger. He has definitely shown his worth in the Junior World Championship with a record 11 tries and has a chance to shine with the Dunedin-based squad.

Above is the CGW segment, while below is a highights reel of Tevita Li in action