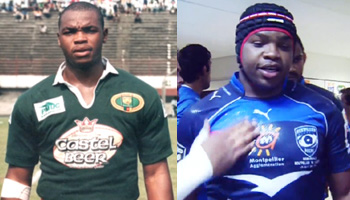 Total Rugby chats to Robins Tchale-Watchou to find out more about his rise from African basketball hopeful, to Top 14 rugby player. The 6ft 5 son of a weightlifter got involved in the sport after a chance meeting with some rugby enthusiasts.

Aged 16, Cameroonian Tchale-Watchou came across rugby for the first time. As he explains, after playing for a while it became clear that he had potential, perhaps more so than in basketball.

From there it took a few years before he played for his country, aged 19, and later he was spotted and scouted to go play in France. He moved around a bit in ProD2, before finally joining Stade Francais, and later Perpignan. From there he went to Montpellier, where he remains, now aged 31.

It’s a great achievement, having come from a country where rugby is relatively small, unlike massive Robins, who still seems a little in awe of the path he’s taken. It’s an inspirational story.

“Each time I had an opportunity to go forward, I took it, and threw myself into the challenge.”