The Aviva Premiership Highlights Wrap - Round 22 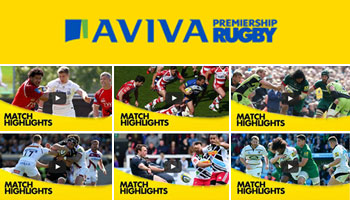 In the concluding weekend of Aviva Premiership rugby action there was much to play for as teams vyed for those final European qualification places, and others hoped to secure themselves playoff semi-finals.  After the jump we’ve got highlights from all six games.

In this concluding weekend of Premiership rugby action there was much to play for as teams vyed for those final European qualification places and others hoped to secure themselves playoff semi-finals.

Below you can view all the highlights, plus our recap, from each match played in Round 22.

In a game many had already put down as a saracens win, a four-try performance from Chris Aston helped Saracens secure their top 4 finish in a comprehnesive victory over London Welsh.

Saracens impressive victory was enough to see them leapfrog over their playoff rivals Exeter Chiefs and secure themselves a playoff semi-final against Northampton Saints.

For London Welsh they say goodbye to centre Tom May, who is retiring at the end of the season, and to Premiership rugby sitting bottom of the table with a solitary point to their name. The worst record in Premiership rugby history.

Two tries from Chiefs winger Matt Jess as well as those from Slade, Nowell and Whitten were not enough to send them into the Premiership top four and the playoffs.

With so much at stake for the Devon side the tension was clear as mistakes crept into the teams play, a phenonomen which has been foreign to Exeter for most of this season.

For Sale the game also marked the end of both Mark Cueto and Nathan Hines’ careers at the club.

Yet another player was saying goodbye this game, and that was Mike Blair of Newcastle. He signed off in winning style grabbing himself a try as Newcastle recorded their first win in four months.

Blair’s try helped Newcastle comeback from behind to win after being down at halftime thanks to tries from Marland Yarde and Nick Evans.

Despite both sides having nothing in essence to play for with both of their safeties secured and a top six finish ruled out, they played an entertaining and open game of rugby.

It took a late try from London Irish substitute Andy Short to grab a spectacular draw against a Wasps side that clinched themselves a top six finish in this eighty point thriller at the Madejski Stadium.

Both teams fly-halfs Andy Goode and Shane Geraghty kicked 15 points each yet neither of them could be seperated at the final whistle.

Keep your eyes peeled for Geraghty’s moment of magic in the build up to Shorts try providing not just one cross-field kick, but two!

The games between these two West Country rivals are always entertaining, and this one was no different as Bath warmed up for their semi-final against Leicester with this 80 point game.

Tries for all of Baths backline bar Matt Banahan helped them romp to an impressive victory. A succession of yellow cards for Gloucester were all heavily punished by a Bath side that were clinical.

For Gloucester, despite the loss they will be looking ahead to their own playoff game against Connacht for a spot in the European Champions Cup.

In what was a must win for Leicester they showed their experience and booked themselves playoff spot away to Bath. Leicester have not finished outside of the top four since 2004.

Northampton’s decision to make 13 changes to their side that had already secured themselves a home playoff semi-final seemed to hand their opponents pre-match initiative.

The game was a struggle of strength which was fought in the packs, Leicester proved superior and tries from Jordon Crane and Niall Morris helped to keep their playoff record intact.