The Best of the Barbarians 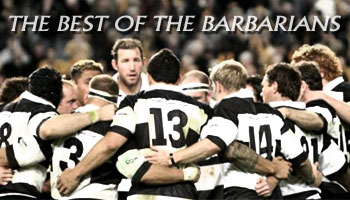 As you probably already know, the Barbarians host the All Blacks tomorrow at Twickenham in a once off match that will be the last of the Kiwis tour matches, and hopefully a showcase of running rugby.

Playing for the Barbarians is a fantastic honour and tomorrow we’ll see a whole host of top players from around the world wearing that famous black and white kit.

Coached by Italy’s Nick Mallet, the Baa Baas of 2009 have an incredibly strong look to them, as they feature not only some of the best players from the southern hemisphere, but some real stars from the north too.

In the centre we’ll see a mouth watering combination – Springbok Jaque Fourie and Welshman and player of the British & Irish Lions series, Jamie Roberts. It doesn’t get more physically powerful than that. When it comes to raw speed, there’s Bryan Habana on the one wing, and on the other, there’s a more than familiar name.

Joe Rokocoko, left out of the All Blacks touring squad, will play on the right wing and will get a chance to prove to the whole of New Zealand that they were wrong to leave him out.

In Matt Giteau and Fourie Du Preez, you have another match winning combination as each of those players are in the top 3 in their respective positions in the world. Up front there’s a few world beaters too – Victor Matfield, George Smith, Schalk Burger and Rocky Elsom to name a few. Throw in Andy Powell off the bench, and this should be an explosive encounter.

Unfortunately though, the All Blacks have named what is very much a second string side. There’s no Dan Carter, no Ma’a Nonu, and Sitiveni Sivivatu is on the bench. What we will see though is IRB World Player of the Year Richie McCaw leading his side.

Against France they showed that they rediscovered their attacking flair, so tomorrow’s match is a chance for them to build on that, as well as blood new talent and let them get out there and prove themselves.

By all accounts, if the weather is good, we’re set for a running spectacle that could well be the most enjoyable game of the last month or so. Predictions welcome.

The Barbarians are all about the big names, so this is a nice clip that shows you some of the best players and biggest names that have played for the famous club in the past. Enjoy.