The Crusaders show their class at Twickenham - Israel Dagg try 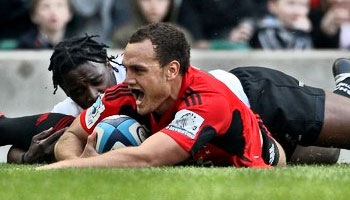 The Crusaders turned it on in the Twickenham sunshine earlier today as their dazzling backs and powerful front five proved too strong for a determined Sharks team. The Christchurch side won 44-28 despite a Sharks comeback.

It was the first ever Super Rugby game outside of the Tri Nations countries and while it was a great spectacle and a wonderful match, it was forced through a natural disaster that has left Christchurch in the unenviable position of having to rebuild from the ground up.

As with all sport though, it has the power to change and while only a little over 35 000 people turned out at the home of rugby in London, money will have been raised, as well as the profile of not only Super Rugby, but the cause at hand.

The first half of the game was all about the sheer class of flyhalf Dan Carter, who ran the ship in a way only he knows how, providing the platform for league convert Sonny Bill Williams to release their dangerous backs. Their scrum was also impressive, as they pushed a Springbok front row in a manner that not many would have predicted.

While the Sharks sorely missed their chief playmaker in Patrick Lambie, the might of the Crusaders would have no doubt blow any side off the park, so the way in which the Sharks came back in the second half should also be commended.

At the end of the day though, this Crusaders side is something special, with running lines like no other, talent to burn, and as they showed the fans at Twickenham, on their day they can be unstoppable. The Sharks did look to get the better of the sub-exchanges later on, and Todd Blackadder and his team will be a little concerned at some of the injuries they picked up.

All in all, it was a brilliant spectacle, a wonderful advert for Super Rugby, and one of the more memorable games of rugby you’re likely to see this season. Below is just one of the tries, as the game ended literally half an hour ago, but further highlights will be posted soon.