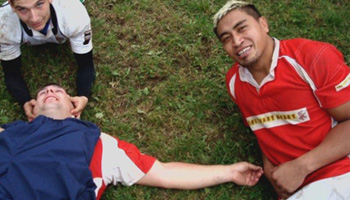 There are some stories that will live on in rugby folklore for all of time. The day Jerry Collins, who tragically died in a car crash yesterday, turned out for Barnstaple Rugby Football Club, in England’s fifth tier, is one of those such tales.

While for many of us we only knew him as the hard-hitting, no-nonsense All Black who played fifty times for the greatest team on the planet, a privileged few got to see a completely different side of Jerry ‘Hitman’ Collins, and the recollections of his humility are endless.

Back in 2007, following New Zealand’s shock exit from the Rugby World Cup, Collins was in the UK for a while longer, so when presented with a chance to have a run out, he did so, shocking those he played with, and no doubt against.

In the below video, one of his teammates on that day recounts the story of how he was injured, so Collins lay down on the turf next to him for a photo, as can be seen above.

“I never got into the team photo and that was the one thing I desperately wanted – my photo taken with Jerry Collins just to prove this had happened,” explained Trevor Wayborn.

“He lay down on the floor next to me and had his photo taken with my head being held until the ambulance came to pick me up.”

Going on to wear the Barnstaple RFC socks when turning out for the Barbarians against South Africa was a lovely touch, and one that in their own words, put the club on the map.

The story speaks for itself, and you can watch another version, via BBC Wales, on page two. That one includes words from the great man himself. May he, and his partner, Rest in Peace.

As the rugby world pays tribute to Jerry Collins, Sport Wales remembers when the former All Blacks and Ospreys Rugby star famously turned out for Barnstaple Rugby Football Club’s second XV while on holiday in Devon back in 2007…Tune into BBC Radio Wales Sport from 7pm as we remember a rugby legend after his tragic death » http://bbc.in/1EZDPuy