The peculiar Vannes vs Narbonne 'no maul' stand off 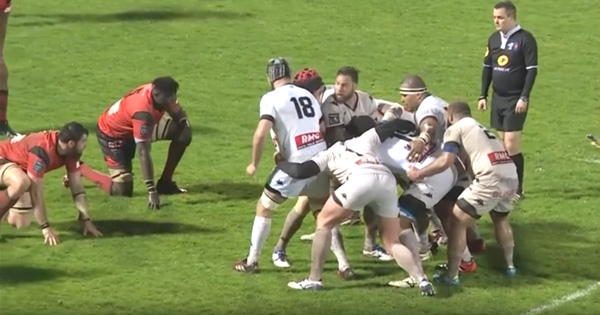 Last weekend’s ProD2 clash between Vannes and Narbonne will hardly be remembered as being a classic. Soggy conditions made fast-flowing open rugby virtually impossible in a game which saw Vannes run out 24-16 winners.

But what will invariably stand out is a bizarre moment of play, in which both sides tried to exploit the laws of the game to their advantage.

Having employed their own version of the “tackle only” ruling inspired by the Southern Hemisphere, Italy aren’t the only team in 2017 to try something different.

Vannes attempted to form a maul from a line-out and would have successfully done so were it not for a severe lack of Narbonne players required to form one. Instead, they stood off, perhaps in the hope that the Vannes players advanced and putting one of them in front of the ball carrier and conceding a penalty.

Referee Mathieu Delpy looked as perplexed as the Narbonne faithful at the Parc des Sports et de l’Amitié as neither side budged an inch. Delpy eventually awarded Vannes a scrum.

The trick Narbonne missed was the fact that since no maul was actually formed, they could have easily ran round to the back of the maul, closed off the exit and win the penalty.

It was a tactic the Italians also used during the 6 Nations between 2006 and 2007 to great effect. There, players were able to run seemingly offside and tackle the ball carrier of the opposition at the back of the unformed maul.

According to the laws of the game, it is unclear whether Delpy awarded the scrum for an unsuccessful maul or simply as a means to restart the game.

An unsuccessful maul can be defined via Law 17.6(d) as such: When a maul remains stationary or has stopped moving forward for more than 5 seconds, but the ball is being moved and the referee can see it, a reasonable time is allowed for the ball to emerge. If it does not emerge within a reasonable time, a scrum is ordered.

Since no maul was formed, it is perhaps the latter ruling Delpy employed.

And Italy’s similar tactics in the 6 Nations: