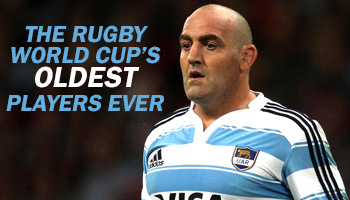 When Nick Easter was recalled to the England squad for the Six Nations at the grand old age of 36, many were doubting whether he still had the legs to play test match rugby. His experience was clearly invaluable amongst the team, and in World Cup year could be key.

The five players below have all featured in rugby’s biggest tournament and with ages of up to 40 still featuring, there is no reason why the old guards shouldn’t have more optimism ahead of September’s World Cup in England.

From the USA’s Mark Williams to Uruguay’s Diego Ormaechea, there is proof that the Nick Easter’s of the rugby world can be full of optimism.

The American centre, now 53 years old got 37 caps for USA between 1987 and 1999. He retired as the third highest points scorer in his country’s history, with 143 points. Williams is now Head Coach of the USA South as they look to give the sport more depth across the nation, submitting teams to the North American Caribbean Rugby Association Tournaments.

The legendary Argentinian hooker is being heavily linked with his first international coaching job. The 41-year-old has been forwards coach at Stade Francais and Montpellier since retiring after the 2011 Rugby World Cup, and is now being lined up by Michael Cheika as the man to rectify the Wallabies’ scrum. The pair worked together in Paris and after featuring in four world cup’s, there is no doubt that Ledesma has plenty of experience to pass on.

The Russian number-eight gained 72 caps for Russia with an international career spanning an impressive 18 years. After earning his club trade in France, Grachev was the oldest player at the 2011 World Cup in New Zealand, but couldn’t prevent a group stage exit for the Russians.

Cardinal featured in three world cups for Canada and scored three tries in his 35 caps at hooker. He made his debut in the win over USA back in 1986 and was a regular in the side after then right up until his retirement, making 27 starts for the Maple Leafs.

Ormaechea is regarded as the greatest player that Uruguay has ever produced and has now had an extreme change of career. After retiring in 1999, the 55-year-old is now a Veterinary Surgeon specialised in Racing Horses.

He is one of the top veterinary surgeons in South America in his discipline, but is still highly regarded for his contribution to rugby. He coached Uruguay at the 2003 World Cup, and his son Agustin now represents his country, with 16 caps to date.

If any coaches needed a reminder about whether to go for the youngster with a bright future or the older more experienced player which may bring instant success, the World Rugby video below may well change their mind!