The Shortball highlights wrap from Round 10 of Super Rugby 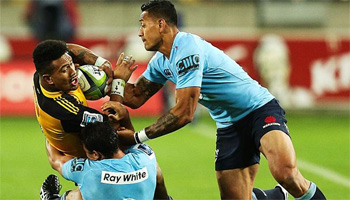 Sean Maloney and the team from Fox Sports are back with the Shortball highlights from Round 10 of Super Rugby. Sit back and enjoy the try of the week, which is another classic from Beauden Barrett, along with some bone-crunching hits and unusual happenings, as the guys at Rugby HQ have put together another great recap.

Barrett is certainly enjoying his rugby right now having also won try of the week in Round 9  – a score which many are tipping for try of the season – and his form surely won’t go unnoticed by the All Black selection committee come September.

Also, get another look at referee Nick Briant’s brilliant reaction to taking a powerful pass right on his nose, along with probably one of the worst bombed tries you’ll ever see from Hurricanes flanker, Ardie Savea.

The Hurricanes’ loss means they are only a single point clear in the New Zealand conference after the Chiefs dominant display over the Crusaders moves them up to fourth overall.

The Waratahs see themselves leapfrog into seventh spot as they try to salvage their season, and inflicting the first loss on the top ranked side will have done wonders for their confidence ahead of the next round.

The Cheetahs’ week goes from bad to worse, as not only did they suffer a home defeat to the Reds by a single point, their flanker Heinrich Brussow has broken his arm and looks likely to miss the remainder of the Super Rugby season.

With more shock results this week and the teams fighting for places on the table, Round 11 is set to be full of exciting match-ups.