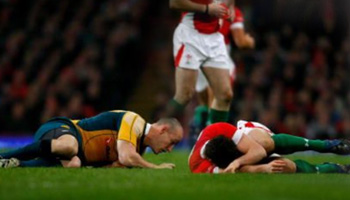 The Wallabies slumped to a 21-18 loss to Wales on Saturday after failing to overcome the second-minute departure of talismanic captain Stirling Mortlock two minutes into the game at the Millennium Stadium in Cardiff.

The huge clash of heads between Mortlock and big Jamie Roberts just a few minutes into the game saw the Wallaby captain having to leave the field looking rather worse for wear.

Roberts miraculously stayed on for another 15 minutes before going off, but it has since been revealed that he has a skull fracture.

Welsh team doctor John Williams was shocked by the injury, later stating that Roberts, a medical student himself, would be out of action until the middle of January, three weeks before Wales begin their defence of the Six Nations championship.

“It was a collision of heads at a certain angle with a certain momentum causing a crack.

“Second week of January he could be back in contact which is three weeks before the Six Nations. We will just watch over the next two or three weeks while this heals.”

Williams added: “He was admitted last night with a fracture to his skull. He is comfortable, pain-free. He will be out of training for six weeks to give it a chance to heal and then back in the New Year.

“It is a fracture extending back from above the nose along the roof of the eye towards the central structures in the base of the skull.

“It is a clean fracture which should heal very easily. It’s an undisplaced fracture so it means that it is a crack which hasn’t moved so it hasn’t caused any internal damage to the brain.

“After the contact Stirling Mortlock looked like he had come off worse. Jamie was conscious throughout and there were no signs of anything, no suggestion of a fracture or any problem with his nose or eyes. The contact was with his forehead.

“And then the headache gradually came on as he was playing about five minutes after and we pulled him off as the headache got worse.

“He is a pretty tough guy. He texted the team (from the hospital) and the team thanked him for taking Stirling Mortlock out of the game!”

Former NRL winger Blake Ferguson remains in custody in Japan, three weeks after he was arrested on suspicion of possessing cocaine.