The Top 5 Aviva Premiership Tries plus Highlights Wrap - Round 18 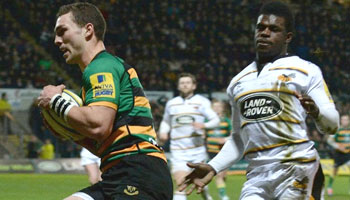 The Aviva Premiership was back in action as Six Nations players returned, and there was plenty to talk about. View our highlights wrap on page two of this post, which includes some controversy and a record crowd at Wembley. Above, the Try of the Week contenders.

The five players who scored the best tries of round 18 are Christian Wade (he got a hat-trick), Will Chudley, Adam Powell, Chris Wyles and George North, who was knocked out for his second.

A game of free-flowing rugby brought with it one of the most controversial decisions of the season, the straight red card given to Nathan Hughes for a supposed deliberate knee to the head of George North who had to leave the field with concussion.

Following the red card Northampton were able to come back from behind and win, a win which sees them move 10 points clear at the top of the Premiership and look certain to remain there with only 4 more games left of this season.

Despite being a man down Wasps put in a superb second half performance and at one point pulled it to within 3 points when winger Christian Wade completed his hat-trick 12 minutes from time.

For North it will unfortunately see him miss Northampton’s next weekend fixture against Clermont Auvergne in the European Rugby Champions Cup. Wasps remain in 6th but will be hoping to push on with Sale on just behind them on points.

Unfortunately for Welsh this defeat was to signal their official relegation from the Premiership. Despite the match being one of Welsh’s better performances it still was their 18th straight defeat of the season.

Bath managed to squeeze five tries through the exiles defence and the victory sees them move into third ahead of the coming weekends Champions Cup quarterfinal against Leinster.

Sam Burgess managed to score his second Premiership try showing off his trade-mark strength to ride a tackle and stretch out for the line. However despite the score line this game wasn’t as easy as it seems for Bath and they had to wait till the 65th minute for their bonus points, which eventually came through Alafoti Fa’osiliva.

Rowland Phillips led the exiles for the first time this season following the departure of Justin Burrell and made six changes to the starting line up. Despite being down, London Welsh are far from out and we are sure it won’t be long until we see them back in the top flight again.

London Irish managed to hold on from a second half Newcastle comeback to record a narrow victory in front of a large over 15,000 crowd at the Madejski Stadium.

Irish were off to a roaring start securing an early 14 – 0 lead despite the home side losing three players to the sin-bin! For Irish the victory is sure to give them confidence but they will be disappointed not to secure the bonus point after scoring three tries in the first half. They pull away from Newcastle in the table who now sit 11th in the table 7 points behind Irish.

For Irish this was their sixth victory of the season but this will certainly be a game that Newcastle will think they could have won, even London Irish interim boss Glen Delaney agreed saying ‘They could have won the game three times over. We got off to an absolute flyer but after that got no ball’.

The boot of Freddie Burns and the second-half try of Geoff Parling were enough for Leicester to gain a bit of revenge at Welford Road after the Chiefs had beat them in the LV=Cup semi-final.

The game was certainly the battle of the kickers and Freddie Burns came out on top, slotting all 6 of his kicks whereas Henry Slade must have left his kicking boots at home, managing just 1 from 3 to secure the bonus point for the Devon side.

For Leicester they continue their record of only losing once in front of their own fans this season, that loss coming against London Irish back in September. The game also registers as Leicester’s fifth win in a row and makes Welford Road an intimidating place to come.

For Exeter the result puts a slight dent in their play-off hopes as they slip into 5th however remain only 1 point off the Tigers in 4th.

Former Leicester player Thomas Waldrom scored yet another try for the Chiefs extending his record as Premier top try-scorer to 13!

Danny Cipriani returned from England duty to guide Gloucester to an important victory against Gloucester to move them within one point of the Aviva Premiership top six.

Cipriani slotted all five of his kicks and assisted a try that sees Sale keep their play-off chances alive but ends Gloucester’s European hopes thanks to tries from Johnny Leota and Josh Beaumont.

Despite a poor first half performance and one that was plagued by the poor conditions came to life in the second half after Cipriani with a beautiful delayed pass found Beaumont and created the games only really memorable moment.

For Sale fans, apart from the victory, the game also happened to be one-club man Mark Cueto’s 300th appearance for the club. In that time Cueto has scored 116 tries and is the Premiership’s all-time leading try scorer with 88. The game also adds to Gloucesters record of not winning at Sale since 2001!

Saracens move up to second place after a dominating performance over London based club Harlequins. Two tries each from Chris Wyles, Chris Aston and Billy Vunipola eased the club to victory.

The game was in fact in front of a record breaking crowd of 84,068 and gave Saracens an important win as the race for the play-offs starts to heat up.

Saracens in fact managed to score 2 tries whilst they were down to 14 men and showed their clinical side as they managed to comeback after conceding a try after only 26 seconds from the kick-off! For Harlequins the result sees them remain in 8th and probably hoping for the season to just end!

Saracens in fact only have four try bonus points, the lowest number in the top half of the Premiership Rugby table.