The Top 5 Aviva Premiership Tries plus Highlights Wrap - Round 19 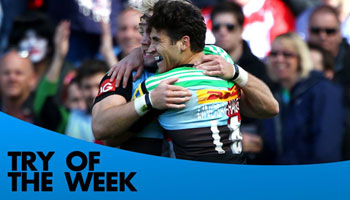 The race for a playoff and a top six finish heated up this week as the contenders faced off against each other in what is a crucial round of Premiership rugby and one that saw a lot of sin bins. View our highlights wrap on page two of this post, which includes some controversy and a record crowd at Wembley. Above, the Try of the Week contenders.

View our Round 19 Highlights Wrap

Northampton’s misery continues as they feel to a rampant Exeter side that showed the excellent combination of power and control. A victory that for Exeter meant that they completed the double over the reigning champions.

In this entertaining display of attacking rugby it was Exeter who broke the deadlock with a fantastic score from Phil Dollman. It was the destructive nature of the Exeter pack that was the difference between the two sides as they forced penalty after penalty and the eventual sin binning of Northampton players that at one stage saw them down to 13 men.

This defeat marks only Northampton’s fourth defeat of the season of which half of them are two the West Country team! This victory means that Exeter move back up into the top four, their place sufficiently secured after this dominating performance.

Saracens keep up their pressure on Northampton after an impressive second-half display which gifted them a comfortable victory over a Leicester side that had won their previous five games.

With the scores at halftime being very even at 7-6, it was the sin binning of Tigers hooker Tom Youngs that helped to tip the balance as both Marcelo Bosch and Chris Wyles both went over in the space of 8 minutes at the start of the half.

This victory sees Saracens secure their seventh straight win in all competitions but more importantly sees them leapfrog Bath and move into second place in the table. For Leicester the result hampers their quest for a playoff finish as they sit 3 points behind fourth place Exeter, still much to play for as the Premiership enters its final weeks.

Bath kept their hopes of a Aviva Premiership title alive with a tenth consecutive victory at Kingston Park on the weekend.

One of the major plotlines throughout the game was Sam Burgess making his first Premiership start at flanker, having spent the majority of his playing career so far at Bath in the centers.

Despite the loss, Newcastle fans did have something to cheer about as Sinoti Sinoti scored what is easily one of the try of the season contenders as he danced through Bath tackles and barreled over the line.

The game also saw Matt Banahan score for Bath securing the bonus point with the fourth try. A try that for Banahan marks his 40th in the Premiership, a number he will surely be adding to.

A tight affair at the Madeiski Stadium saw Irish claim victory over Sale and severely dent the Sharks hopes of securing a top-six finish.

The try double of Alex Lewington was enough to see Irish through in a game that could have gone either way. The game was full of sin bins, four in fact! This seemed to suit Irish however as Lewington showed great strength to break a tackle and score under the posts.

Resolute and determined defence by Irish saw them hold off the barrage of Sale attacks which also sees them deny Sale a first league double over the Exiles for nine years.

Wasps managed to record their first away win in 2015 thanks to the superb performance of Tom Varndell. The winger bagging a hat trick to help Wasps claim an all important bonus point in the race for a top-six finish.

Despite a somewhat convincing loss, Welsh can be proud of their performance, the London side trailed by only a mere four points at half time. For Welsh the loss also saw the debut try for winger Chris Elder who darted over in the corner to give the Welsh supporters something to cheer about.

For Welsh also this loss marks their 29th straight defeat of the season and 19th in the Premiership. On the other hand the victory for Wasps was only their second away win, the first coming against Gloucester over Christmas.

Harlequins managed to keep their hopes of qualifying for next year’s European Champions Cup alive with a dramatic win over Gloucester.

The double sin binning of Charlie Sharples and Ross Moriarty provided the edge that Quins needed as both Lindsay-Hague and Yarde scored following their time off the field. Gloucester weren’t done just yet however as Dan Robson crossed the line in the dying seconds to give Harlequins fans a brief scare. However the London side were able to see out the last knockings and give them an all important victory.

Both sets of sides will be looking forward to the end of what in both their eyes, has to go down as a disappointing season. One thing is for sure though, and that is that these sides will be back in force next year!