The Top 5 Aviva Premiership Tries plus Highlights Wrap - Round 20 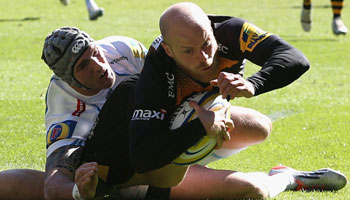 With only 2 rounds left to go of this seasons Aviva Premiership things are really starting to heat up, both in the race for a top 4 finish and for the last European rugby spot. One things for sure though, this season is going to go right down to the wire.

HIGHLIGHTS:
We’ve put together a recap from each match, including official highlights, on page two

A fantastic score from Joe Simpson coupled with 18 points coming from the boot of Andy Goode saw Wasps maintain their hold on the sixth and final qualifying spot for next season’s European Rugby Champions Cup.

For the Chiefs, they slip out of the top four into fifth, however remain a sole point behind their fourth spot rivals Leicester Tigers. One positive for Chiefs is that Thomas Waldrom again added to his try scoring tally for this season with his 14th.

Northampton got back to winning ways and guarenteed themselves a top-four finish with a clinical display against Saracens.

Stephen Myler was the hero for Northampton with his 20-point haul from the boot to help Northampton come back from behind to win the top of the table clash.

Saracens in fact started the game wearing white shirts, however changed into their usual black jerseys at half time after that kit was driven from St Albans to Milton Keynes to avoid any further clash with Northampton’s St George’s Day red and white kit!

Welsh were reduced to 14-men after number 8 Chris Hala’ufia recieved two yellow cards, the first coming from a no arms tackle and the second after shoving a Leicester players head into the ground after a tackle.

The sending off was the nail in the coffin for a Welsh side that couldn’t contain the Tigers who made Welsh pay with their numerical advantage afterwards. The result being that the exiles were left suffering their 20th consecutive Premiership defeat.

Newcastle fans will be devastated that they managed to throw away a 40-23 lead in a thrilling game at Kingsholm park.

Billy Burn’s of Gloucester scored a last minute try to snatch victory away from the visitors and extend their winning run to nine straight games . On the negative side for Gloucester however Jonny May, Sione Kalamafoni and Dan Murphy all limped off the field and making them all doubts for next weeks game against London Irish.

Sale’s second-half comeback fell only a couple of points short as Harlequins managed to hold on for a bonus point victory at the AJ Bell Stadium.

Harlequins had a comfortable 22-6 lead at half-time, however a resurgent Sale came out for the second-half with former England winger Mark Cueto crossing for a record 89th time in his career, three times ahead of fellow winger Tom Varndell.

For Harlequins they move up to within a point of seventh place Sale, both clinging on to a outside chance of European Cup Competition.

Rugby League convert Sam Burgess put in a man of the match performance to help Bath on their way to a comfortable victory. A victory which sees Bath move up to second place as the race for the play-off home spots reaches its conclusion.

Bath put in an almighty performance and a 15 minute blitz saw them score four tries in the space of fifteen minutes! The victory sees Bath keep their dream of winner the Premiership for the first time since 1996 alive.

With Sam Burgess putting in another strong performance, is he in with an outside chance of England’s World Cup squad?