The Top 5 Aviva Premiership Tries plus Highlights Wrap - Round 21 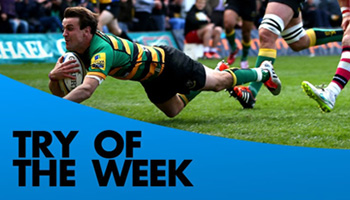 The latest round of Aviva Premiership rugby saw the end of an era for two of the leagues greatest players – Ugo Monye and Mark Cueto – as the race for a playoff spot heads towards its climatic finish.

The two former England players didn’t disappoint on their final home appearances and alongside Chris Wyles, Lee Dickson and Chris Aston all feature on this weeks tries of the week.

Which is the best try in your opinion?

View our Round 21 Highlights Wrap

Ugo Monye appeared in a Harlequins shirt for the final time at home before retirement, however his send-off wasn’t to be a victorious one as Bath secured themselves a top 4 finish in this thrilling encounter.

Bath’s victory means that they will feature in this years playoffs, however for Harlequins their slim chances of a top six finish are over. A 40m penalty from George Ford with 5 minutes to go was enough to see Bath through.

Monye starred on his final home game, scoring two tries for the London club and left the field to a standing ovation as he was replaced by Charlie Walker

Another player celebrating his final home game was Mark Cueto of Sale. He finished the game in style touching down for his 90th Premiership try.

The result for Sale means that they go to their next game against Exeter Chiefs still in with a chance of clinching sixth position and Champions Cup qualification.

For Newcastle they can take heart from a performance that saw them come-back from a 13-point defecit at half-time, putting in a second-half showing that surely set a few Sale fans pulses racing!

Thomas Waldrom continued his sensational try scoring record as he helped Exeter Chiefs secure themselves a stunning victory over Saracens and a nail-biting final game in the race for a top 4 playoff spot.

Waldrom dotted down in both halves along with Luke Cowan-Dickie to help the Chiefs on their way, despite the fine finishes of Chris Ashton and Chris Wyles.

The result sees both teams, including rivals Leicester Tigers, still all within a chance of a top 4 finish. Cheifs go into next weekends game against Sale in 4th place, one point behind Leicester in 3rd and just ahead of Saracens on points difference. It certainly is all to play for in the final round of fixtures!

Gloucester, regardless of a first-half red card to Matt Kvesic, hung on to win a three-try victory against opponents London Irish.

Despite their numerical disadvantage Gloucester managed to score three tries through Jonny May, Dan Thomas and Henry Purdy.

The result leaves Gloucester in 9th and Irish in 10th. Both teams will be looking to end their seasons on a high and look forward to much better seasons next year.

Wasps move to the Ricoh Arena means we will see some much more fiery midlands derbies and this game was no different.

The defeat was only Wasps second since their move and it could prove the most costly as their chances of holding 6th place are in danger to a hungry Sale side. The game also saw the only time this season that Wasps had failed to score a try.

For Leicester, their dreams of a top 4 finish are still in the balance, and may all come down to their last fixture against Northampton.

It what was probably considered by many to be a forgone conclusion, Northampton didn’t disappoint and secured the victory which sees them maintain their spot at the top of the table.

The league leaders required four tries for the bonus point that would see them secure the top spot for the first time in the clubs history. The game also saw a fifth try in eight games for Northampton’s Ahsee Tuala who signed for them back in Februrary.

For Northampton the win sees them have a consecutive home semi-final, and they will be watching the final rounds fixtures eagerly.