The Top 5 Tries of the Aviva Premiership weekend - Round 16 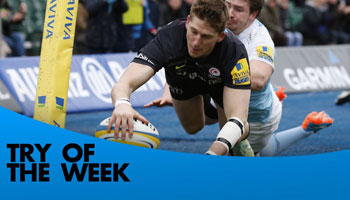 With all the shocks and big clashes of last weekends Six Nations matches it is easy to forget the Aviva Premiership, however this week’s tries of the week showed up some real doozies. A perfect mixture of tries containing pace, power, offloading and most important of all, quality finishing.

This weeks top 5 tries feature the likes of Marlon Yarde, Tom Arscott, David Strettle, Ross Moriaty and Thomas Young. There’s also a massive hit in there, so see if you can spot it – it’s hard to miss.

BONUS TRY: A fan favourite for many a year has been Alesana Tuilagi, formerly of the Leicester Tigers but now back in the UK with Newcastle Falcons after his stint in Japan. He scored a trademark Tuilagi type of try against Saracens, so take a look on page two for that one. Runaway train!

Your thoughts on the best try of the five (or six) on show here? Let us know in the comments below