The Top 7 Best Tries at the Vancouver Sevens 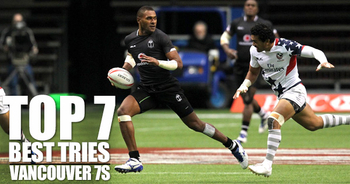 Canada’s first taste of HSBC World Series 7s proved to be a huge success, with large crowds and superb knock-out stage matches. Needless to say, there were tries aplenty, and World Rugby has picked the seven that made their final cut.

Although New Zealand and South Africa produced a great Cup final, it was Fiji who undoubtedly stole the show with their at-times ridiculous array of skills and passing. Two of their tries were included in the top 7 with Osea Kolinisau’s finish a particular highlight.

Australia’s Henry Hutchinson scored a brilliant kick-and-chase try in his side’s win over Wales, showing a fantastic set of legs to sprint over.

One of the picks of the tries was Kurt Baker’s effort in the Cup final against South Africa. The try was made by a combination of Gillies Kaka’s deft restart and Sam Dickson’s equally impressive take on-the-run to serve Baker.

Honorable mentions go to Rosko Spekman who showed great pace to gather his own kick in South Africa’s quarter final win over Wales as well as Samoa Taloa’s try against Scotland.

You can view all the tries from Vancouver leg of the HSBC World Series in the video below: