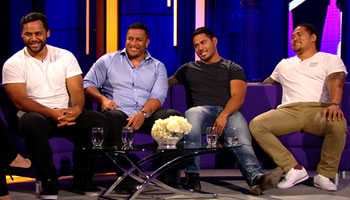 Samoan brothers Manu and Alesana Tuilagi appeared on the Clare Balding Show this week, along with Tongan brothers Billy and Mako Vunipola. If you missed the show or aren’t able to watch the repeat, here are six great clips featuring a few funny moments and interesting bits from the guys.

You can catch a replay of the full Clare Balding Show on BT Sport 2 (UK) on Saturday at 18:30

Manu and Alesana were talking about their mum when Manu gets a surprise phonecall..

Manu and Alex (Alesana) discuss their cross dressing brother, Julie, and how other cultures could learn a thing or two about acceptance for the transgender community from Samoan culture.

Clare talks about the day that the Tuilagis demolished Nick Abendanon in a Premiership match. We featured a video of it at the time, and the tackling was brutal.

Clare asks about some Manu Tuilagi ‘facts’ from twitter

Why rugby is played in the South Pacific, as explained by the Vunipola and Tuilagi brothers

Billy Vunipola on why he left Wasps, and which brother is his mother’s favourite