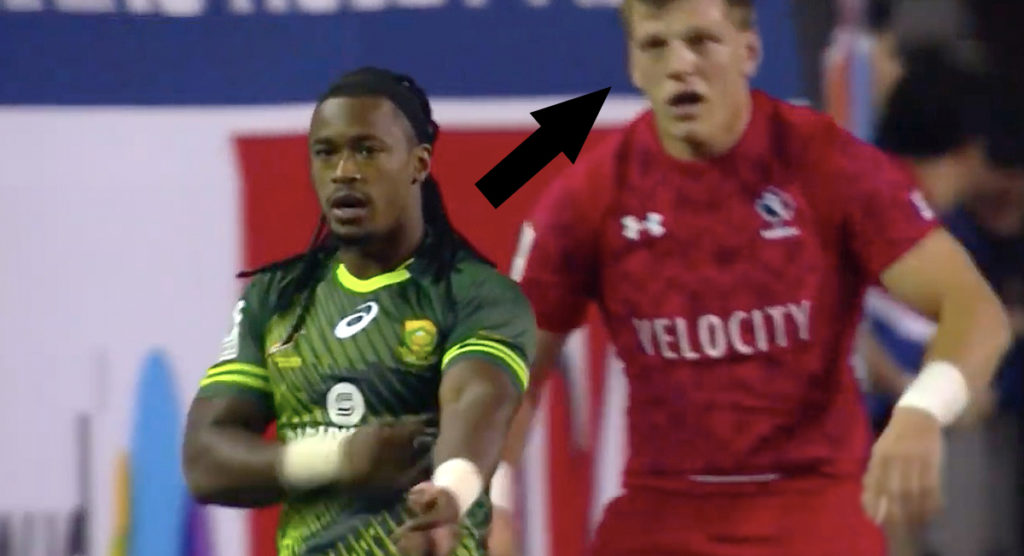 We all love a good underdog story and the beauty of rugby is that there is a time and place for everyone, regardless of size. Usually, it’s the little guys who get run over by the giants, but this time around, technique and heart proved victorious.

Canada’s Adam Zaruba is a big unit. Standing at 6 ft5 and 120kg’s, he’s not only incredibly powerful but skilled too (remember this??).

He was actually signed by the Philadelphia Eagles in the NFL, and while that hasn’t quite worked out yet, he’s clearly someone who has plenty to offer in both sports.

South Africa’s 7s star Branco du Preez, on the other hand, is relatively tiny in comparison. Weighing in at just 72kgs and 5 ft 5 tall, Du Preez makes up for his lack of size with incredible speed and skill and is one of the Blitzbok’s most valuable playmakers and goalkickers.

When the two players last came up against one another at the Las Vegas Sevens, it looked like there would be one clear winner, as Zaruba charged down the wing and got into position to do a Danny Barrett and flatten the smaller opposition.

Du Preez had other ideas, as he got in low and drove with his legs, dumping Zaruba into touch with an inspirational tackle that defied the size difference between the two players.

No fear, just heart and the knowledge that without his legs, Zaruba had nowhere to go.

The fifth leg of this season’s World Rugby Sevens Series kicks off next Friday, 1 March, in Las Vegas.

The home side, the USA, won in Vegas last year so with them on rich hot form of late, including four runner up silver medals in succession, they will be looking to convert that to another series win in front of their loyal home fans.

New Zealand and the USA are both on 76 points at the top of the table, followed by Fiji on 72 points.

MUST WATCH: Zaruba’s incredible piece of skill from the Paris 7s in 2016